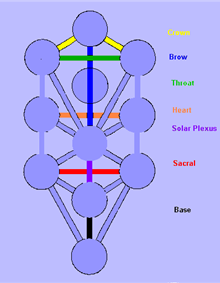 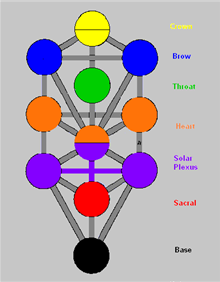 This association of the Middle Pillar with the chakras in practical work creates a natural equilibration of the energies of the Brow with the Crown and the Solar Plexus with the Heart. Incidentally, it has an interesting correlation with the "whole armor of God" given in Ephesians 6:13-17:

The relationships are shown in the next table.

It is also possible to put the chakras on the paths of the Tree. Note that the order of the interior stars follows the order of the planetary paths with the sole exception of the Sun where a substitution is necessary at the path of Leo, which the Sun rules.

Using the planetary rulerships and a combination of planetary and zodiacal paths on the Tree, it is possible to create an interesting and symmetrical diagram of the chakras on the paths of the Tree.

There are several ways of associating the planets with the chakras, but the outline below follows the system of Case. It is based on a variety of considerations including alchemical associations, medical astrology, and gematria.

The Seven Interior stars and their associations are given in the following table:

If one attempts tp place the chakras on the Tree of Life, there is an immediate difficulty. Since there are seven classical chakras and the Tree has ten (or eleven, counting Daath) spheres total with only five on the Middle Pillar, some adjustment is necessary. If the chakras are placed vertically on the Tree, the levels created by the side sephiroth can also be used. There are several ways of doing this, but one of the most effective is shown in the following diagram.

The Chakras on the Tree

The chakras are energy centers in the etheric body which have been described as looking like flowers or whirlpools to clairvoyant sight. From the discussion of levels or planes on the Tree, a natural correspondence with the chakras can be inferred.

Although the name chakra, meaning "wheel" is of Sanskrit origin, the concept is found in a variety of cultures and traditions, including western esoteric lore.

In the west, these energy centers are associated with the seven elder planets and the seven associated alchemical metals. The combination of the planet and metal has given rise to the concept of "seven interior alchemical stars." These are depicted on the tarot Key 17, The Star.

Many of the chakra associations can be summed up in this final table: