The first is the Valley of the Shadow of Death. This occurs on the Path of Tav just above Malkuth. This is the 32nd Path and is attributed to the planet Saturn. One may think of this as the pain of being fired from the Bow of Qesheth. On this path one leaves the mass mind and his or her accustomed cohort and forms associations with a new group of spiritual seekers. A form of death is experienced here, but this is death to the old way of life.

The second crisis is the Lesser Dark Night of the Soul. This occurs on the Path of Samech where it is crossed by the Path of Peh. Mars is the associated malefic for this crisis, which has been called a crossing of the Gulf. This experience is the rending of the Veil of Paroketh. The veil referred to is, in this context, the illusion that the personality is the true Self. This illusion must be shattered as the personality consciousness yields to the individuality consciousness. This is also a form of death, the death of the personality. This experience is depicted by the Blasted Tower (Key 16) which shows personal selfhood forever overthrown by a glimpse of illuminated consciousness.

The third crisis the Greater Dark Night of the Soul. From the experience of the Lesser Dark Night, one can infer that this is the transition from the individuality consciousness to the divine consciousness. This occurs in the desert of Path 13 and is associated with crossing the Abyss. We may attribute the abyss at Daath to the planet Pluto, and hence this experience is an experience of Pluto. This is the crisis of great dissolution, the final experience of death, comparable to the Lake of Fire.

The Chasms of Consciousness

It is sometimes said that there are three points of crisis which confront the spiritual aspiranton the Path of the Serpent. It is interesting that all three occur at points on the Tree of Life associated with some of the astrological malefics. 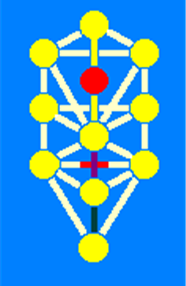