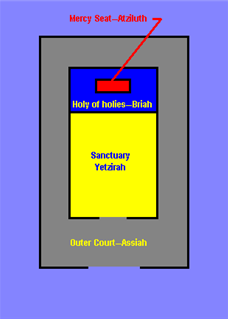 Using this model, Kether is the center of Atziluth, which also extends into the Unknown.

Daath is the center of Briah, and since Daath is often taken as the confluence of Chokmah and Binah, this explains why they are often given as the spheres of  Briah.

Yetzirah is centered in Tiphareth, but also includes Yesod.

Malkuth is the center of Assiah, and the lack of overlap shows the pendant nature of Malkuth.

The Four Worlds are compared to Solomon's Temple as follows:

The Tree of Life diagram is a representation of many of the concepts of the mystical qabalah, that branch of qabalistic philosophy  which deals with theosophical and cosmological ideas.

Qabalists posit four interpenetrating worlds or dimensions of creation.  These worlds are:

Since there is said to be a Tree in each sephirah of the Tree in each of the four worlds, this would make 400 spheres in all.  Therefore, a model of just four levels is a simplification.  However, this makes it easier for the mind to grasp.

Another advantage of conceptualizing four worlds is that this allows correlation to the elements and name JHVH, the holy four-lettered name of God.  Thus the table can be expanded to this: 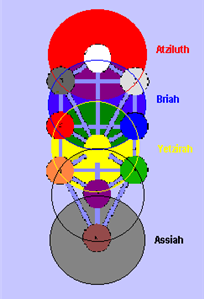 There is a simplified way to place the worlds on a single tree, and this is to use the circles one would draw with a compass if one were constructing a Tree of Life.  This model is the basis of the Vesica Piscis.

If must be emphasized that this is just one way of overlapping the worlds, but it is instructive.  It can be seen that the sephiroth are located at the interstices of the overlapping circles, which suggests that they represent transition points of vibrational energy.