As an aid to study, it may be more instructive to consider the paths in tabular form for this allows examination of some of their associated qualities.

Note that the paths are numbered in reverse order starting with Malkuth and ending at Kether. In general, the numbering of the paths follows the rule that, for each grade, the path with the higher number begins in the lower sphere. Exceptions are marked with an asterisk.

The Rosicrucian Grades and Composite Paths

Occult orders in the Rosicrucian tradition frequently associate spiritual progress with a series of ten grades or initiations correlated to the qabalistic Tree of Life. Each of these grades can be considered to consist of assigned work, an expansion of consciousness acquired, and a spiritual power confirmed. Admittedly, this scheme is theoretical, and the level of spiritual development attained by any individual often differs widely from a ceremonial level of initiation conferred in a magical lodge.

Inasmuch as the Tree of Life consists of 22 paths connecting the ten spheres, progress can be considered to occur along the paths leading to the sephiroth. Each grade will therefore consist ofthose paths leading to each successive sphere. The sequence of successively experiencing each path of the Tree has been called the Path of the Serpent. The image is one of a serpent winding its way through the paths of the Tree like the rungs of a ladder. The serpent is a symbol of wisdom, and, as the Tempter, is an apt symbol for the experience of the manifold aspects of the Tree. 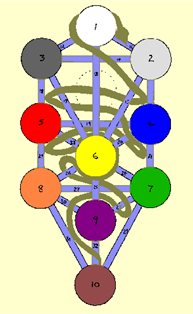