This diagram is attractive, for it allows obvious comparison to the Ptolemaic model of the Universe with its 10 spheres of existence. Another advantage of the concentric model is it that it is consistent with the occult understanding that the subtle bodies surround the physical body like a series of nesting dolls. This model is also almost implicit in the doctrine of zimzum, or contraction, wherein the infinite Transcendent withdraws into Itself in order to create space for the finite Immanent.

The diagram everyone is familiar with is the parallel arrangement of the sephiroth into columns. This arrangement is even more useful than the circular one, for separating the spheres in this way allows them to be compared and contrasted and inter-connected with lines which can also be assigned names and meanings. By tradition, the sephiroth are thought of as objective aspects of Universe and the lines or paths connecting them as subjective states of consciousness.

The system seems so complex that it is often difficult for a beginning student to find a way into it or get a sort of hand-hold. To those approaching the Tree for the first time, the following suggestions are offered.

One should initially try to become familiar with the basic terminology such as the names of the sephiroth, the way the spheres and paths are numbered, and a system of attribution of Hebrew letters and other symbols (such as zodiacal signs and tarot cards) to the spheres and paths. This will take a little work, but it simply must be done. However, it doesn't all have to be done at once. Many of the attributions can be found on this website by clicking on the desired sphere (sephirah) and path of the Tree diagram. The system of attributions used here is that of the Servants of the Light School of Occult Science, which follows the general scheme used in the Golden Dawn, as well as by Aleister Crowley and Paul Foster Case. There are other valid systems, but these fall outside our tradition.

Practical work using the Tree in meditation or ritual must come next. This is best had under the auspices of a mystery school or system of supervised magical training.

INTRODUCTION TO THE TREE OF LIFE

The Qabalah is a system of esoteric learning which originated in the Hebraic tradition, but draws together innumerable esoteric influences and organizes a multitude of occult and philosophical concepts. The central symbol of this esoteric system is a pictorial diagram of circles and lines known as the Tree of Life.

It is obvious that the Tree of Life diagram doesn't look much like a real tree. In fact, it is a highly symbolic depiction of the relationships between all areas of knowledge and experience. The relationships depicted on the Tree of Life are so universal and complex, that it was referred to by Dion Fortune as "the Mighty, All-Embracing Glyph of the Soul of Man and the Universe." Aleister Crowley described the Qabalalistic Tree of Life as a filing system. It is all of this and more. It is quite literally the basis for the vast majority of western esoteric thought and magical practice. Some of the articles following this introduction illustrate the use of the Tree of Life as an organizing tool.

Perhaps the simplest diagram of the ten spheres called "sephiroth" or "emanations" is a series of concentric circles with Malkuth or Earth in the middle and The Crown or Kether at the outside. 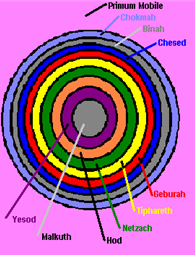 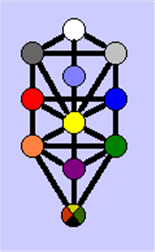