The Right-hand Pillar of Mercy is known as the Silver Pillar. It is the active, male, or projective pillar and symbolizes the energy channel of Pingala. It overlies the sephiroth of Chokmah, Chesed, and Netzach.

The central sephiroth constitute the Middle Pillar, said to be the pillar of consciousness, depicted in yellow in the diagram. The Middle Pillar symbolizes the force channel of Shushumna. This pillar exists in the polarity created by Force and Form. 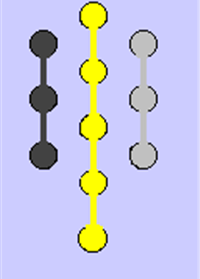 The spheres of the Tree of Life diagram fall into three columns known as The Pillars. The concept of pillars is a very old one in the mysteries and signifies duality and polarity. According to tradition Hermes Trismegistus concealed the knowledge of the antediluvian world in two pillars. One contained Art and the other contained Science.

Entry into Solomon’s Temple was gained between the great pillars of Jachin and Boaz. Jachin means "He will establish," and Boaz, means "strength" (2 Chron 3:17).

This symbolism is carried into the design of the columns of a masonic temple. There are usually two literal pillars in the Lodge, and three are often depicted in masonic art. One of the masonic pillars corresponds to the Sun and is the Jachin Column, whereas the other corresponds to the Moon and is the Boaz Column. In masonic art they are usually depicted on opposite sides from their qabalistic positions. 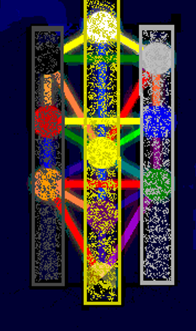 The Middle Pillar of consciousness could be thought of as existing in the matrix of force and form, and as consciousness is the basis of all things, this helps explain the teaching that manifestation exists because of polarity. When the magician or initiate stands between the pillars, he or she becomes the middle pillar, inevitably tending to produce balance and harmony by induction. Recall the hermetic aphorism, "Equilibrium is the basis of the Great Work."

In another sense we can take the pillars as manifesting in the order in which their top sphere is activated by the Lightning Flash. Thus, the Middle Pillar comes first, then the Silver Pillar, and finally the Black Pillar. One can think of consciousness generating force and force generating form. Another way of saying this is that form is patterned force, and force is patterned consciousness.