Jewish qabalists envisioned a Kingdom of Shells, known as the Qlippoth or Kelippot. This Infernal kingdom is also known as Hell, though what is intended is not exactly the same as the popular conception of the place of torment.

Qlippoth means "shells" and is said to consist of debris left over from an influx of divine force too strong for the lower planes or sephiroth to withstand. The shells are usually considered as realms containing demons or evil spirits as a negative reflection of the Tree of Life.

The Qlippoth is sometimes divided into the Seven Abysses which lie below Malkuth. They are known as Gehenna, Death's Shadow, Death's Gate, Mire of Mud, Pit of Corruption, Place of Destruction, and Sheol. (See the Seven Palaces). Note that the qlippoth is an inversion of the Tree of Life, so the realms corresponding to the Supernals lie furthest from Earth. The qlippoth is said to consist of tohu (impure earth), bohu (impure water), and darkness (opposite of Light), terms all found in Genesis 1:1. 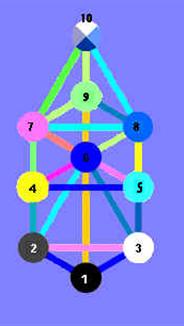 The Light Worker will usually want to leave these forces severely alone, but some insight may be had by considering their meanings in relation to the sephiroth of the Tree.