Another set of associations on the Tree of Life are the Three Triangles. Like the Four Worlds and the Countenances, these are a way of considering the sephirothic energies as parts of larger patterns. 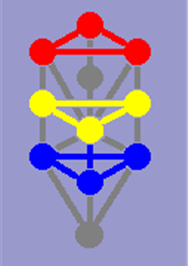 The triangle is the first geometric figure and the most stable of forms. Triangular groupings of energy are also stable and exceedingly powerful.

The basic qabalistic triangle is the supernal triangle of Kether, Chokmah, and Binah. Each lower realm can be seen as a reflection of the first triangle.

The first triangle is called the supernal triangle or Triangle of Divinity. On a composite Tree containing all four worlds, this is the archetypal world. Mathers called this the intellectual triangle, which term is more appropriate on a psychological Tree, that is, the microcosm in Yetzirah.

The second or middle triangle consists of Chesed, Geburah, and Tiphareth. This is called the Spiritual Triangle. On a composite Tree of the microcosm of humanity, this is the triangle of individuality. When the microcosm is considered in Yetzirah, this is the moral or ethical triangle.